Work continued on various areas of the Southern Highlands during the month of August. Firstly, the farm house was completed and is ready to be installed on the layout. 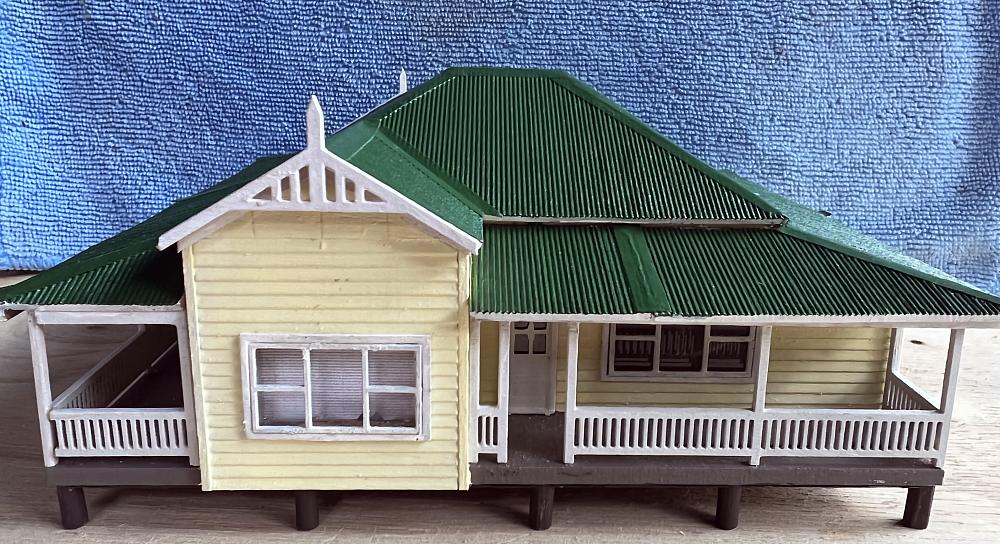 The completed farm house, ready to be glued into position within the rural scene.

Small grains of sand were added to the inside of the milking shed. The sand was sieved to take out the large particles and glued into the milking area. Once the glue is dry the sand will be painted and this will give the look of cow pats mixed with dirt as you would expect to see at such a well-trafficked location. 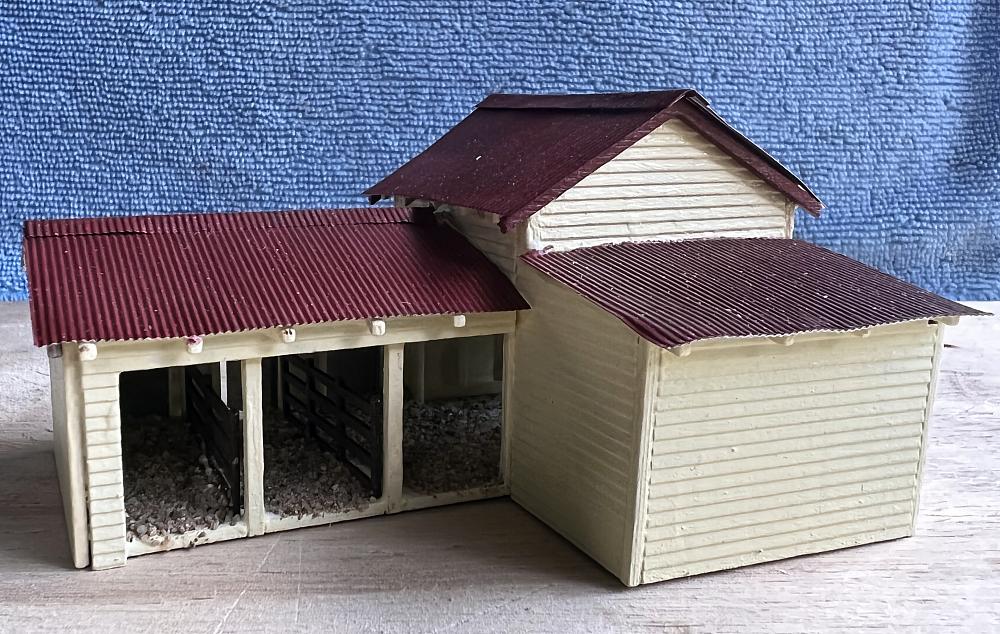 The milking shed nearing completion with floor texture added which is ready for colouring.

The yard area of the milking shed received the same treatment. Once the sand is painted to look like mud the roofing material will be added and weathered to complete this model. 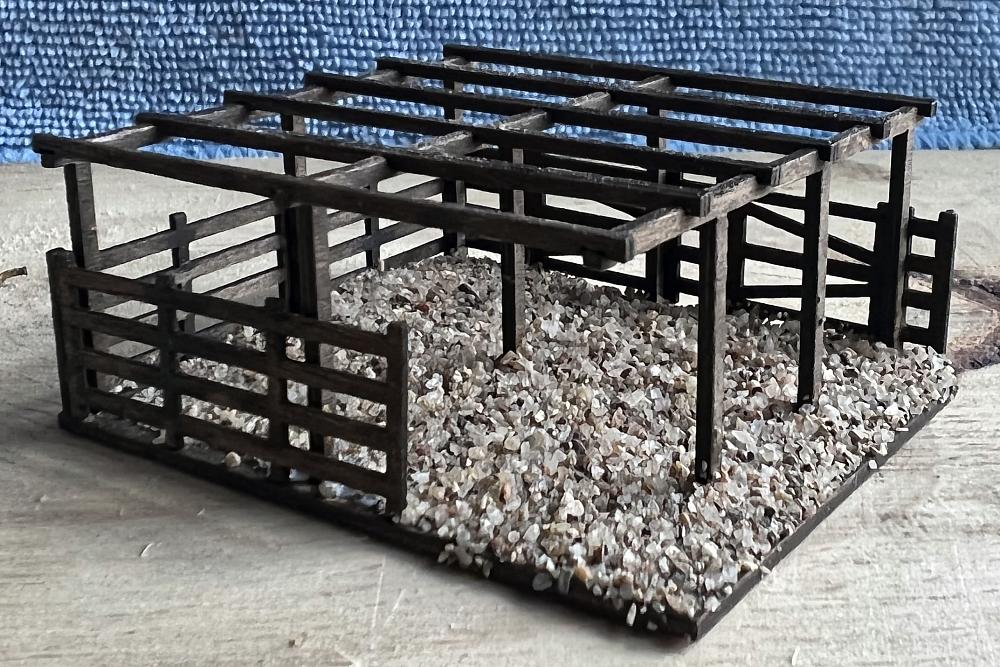 The yard area of the milking shed ready for ground colouring and roofing.

A small machinery shed will be included as part of the farm. The shed is constructed from a timber kit. Once the glue has set it will be coloured to look like untreated timber and the walls and roof added. 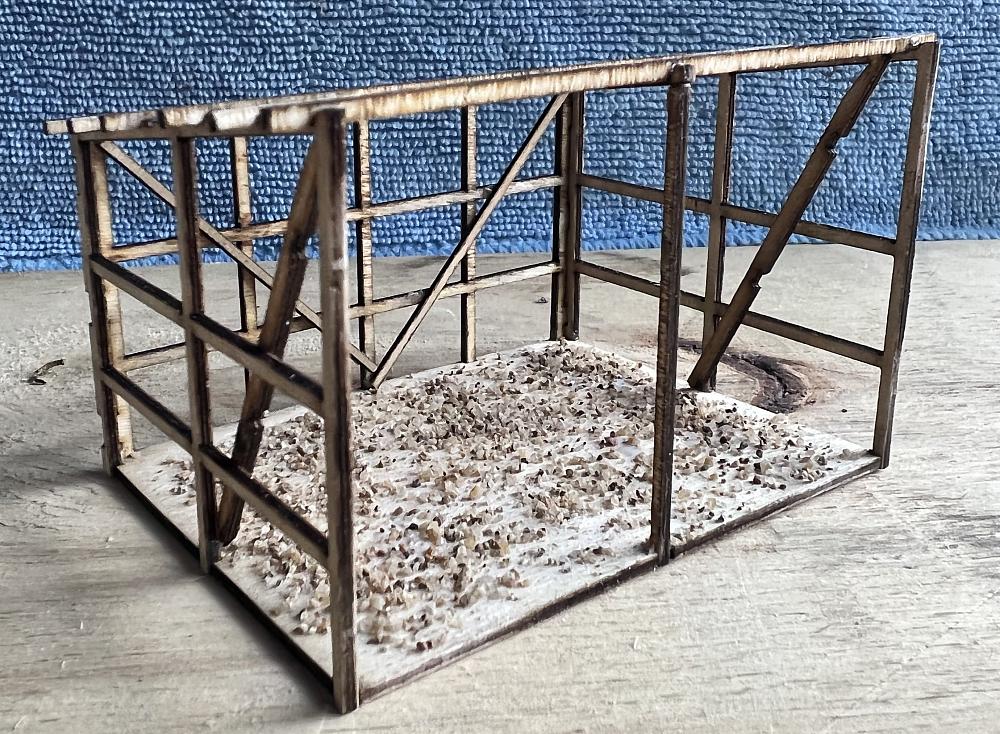 The street scene near Mittagong station was laid out before roadwork got underway. The road is made from 30 thou styrene sheet glued down with contact cement. Modelling putty ia applied and sanded at the styrene joins before being painted a bitumen colour. 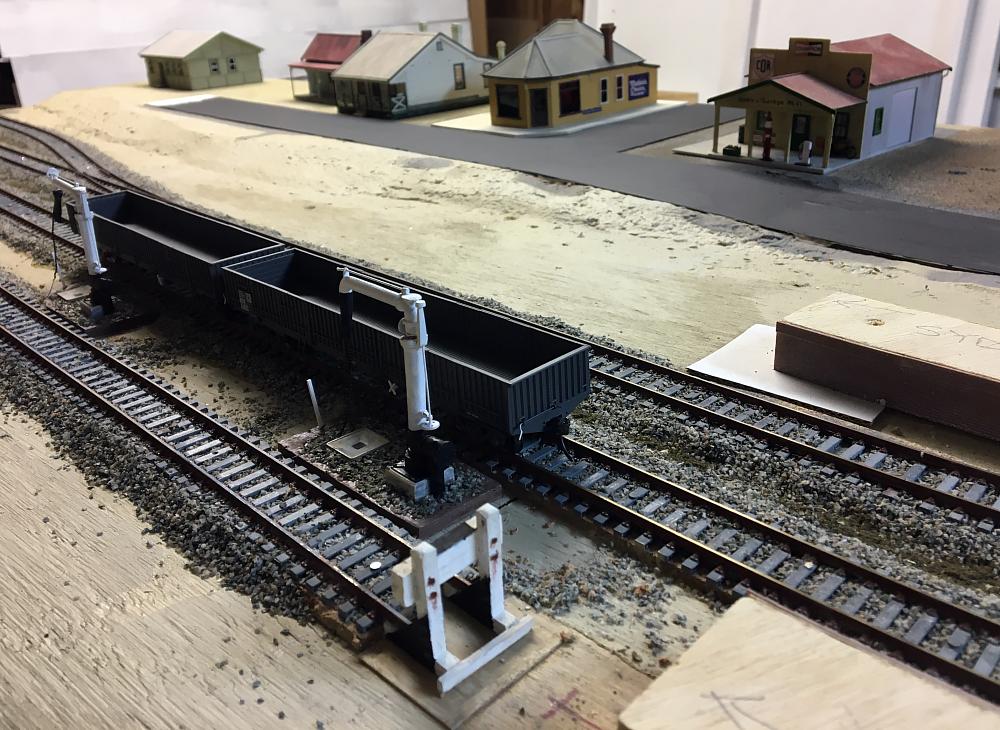 Overview of the street scene adjacent to Mittagong station. A pair of BDX open wagons sit on the Up Main line just past the Sydney end of the platform. Water cranes, used for watering steam locomotives when stopped at the station, have been placed in position.

With the road in position, ground texture was applied - firstly a coat of coloured grout, over which static grasses and gravel were applied. 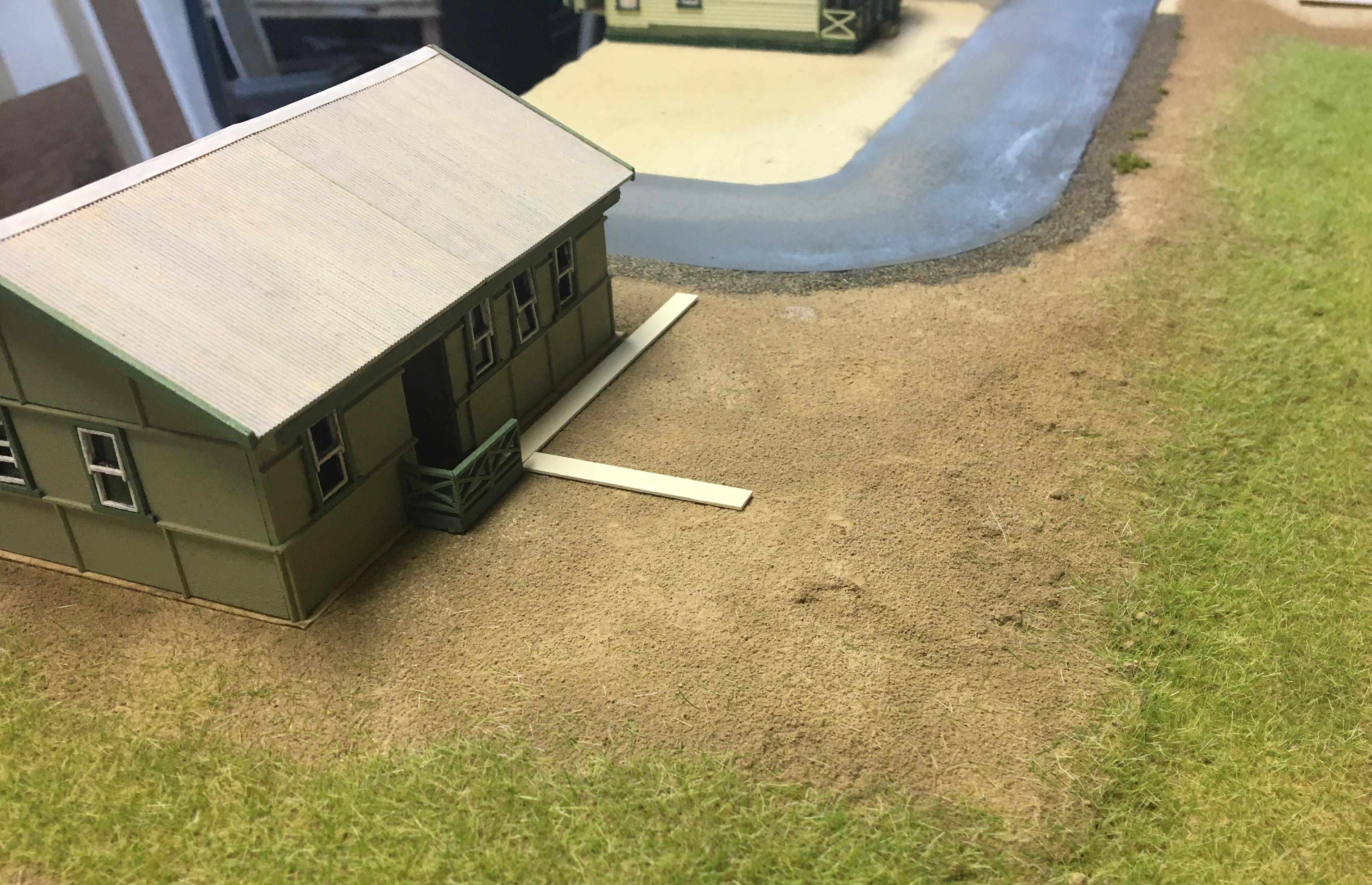 The Scout Hall is sitting in position while concrete paths made of styrene are glued in place.

View of the street where a corner store sits opposite the local garage.

Attention turned to various bridges that feature on the layout. The abutments and wing walls for the the road overbridge near the Maltings were glued into position. On top of this sits a scratchbuilt bridge. The steel I-beams were painted gun metal grey and glued to the 4mm timber bridge base. The bridge sides were constructed from Wills brick sheet glued back to back, with wire mesh added and braced with styrene risers to represent metal posts. The road either side was made from pieces of 30 thou styrene, shaped, glued and painted in place. Fencing was constructed from Uneek platform fencing. 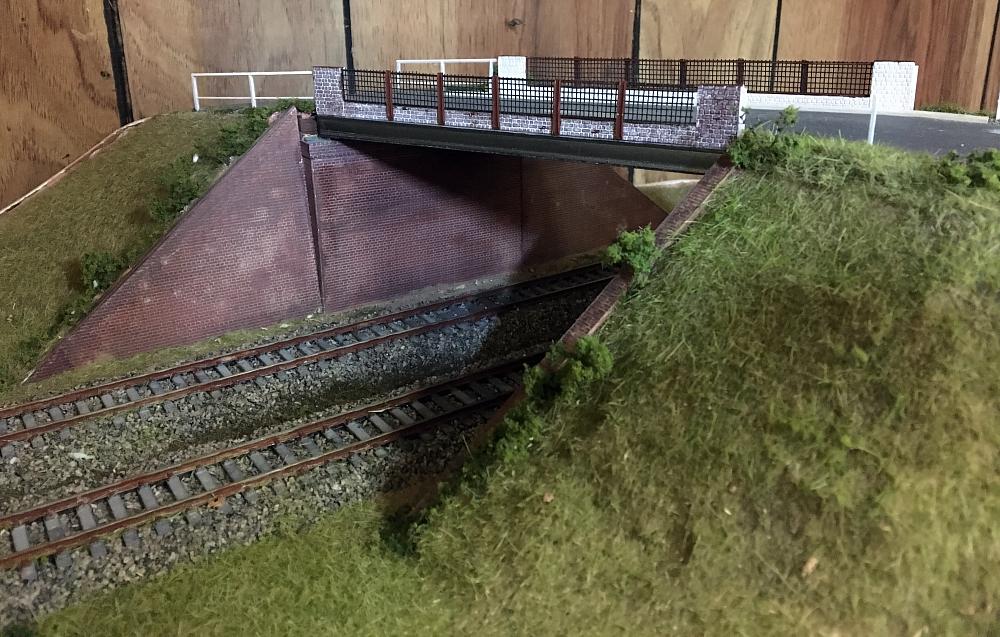 The road overbridge with surrounding scenery comprising of static grass and other ground cover.

Stone sheet has started to be applied to Stonequarry Viaduct. The arch undersides are much smoother than the sides and this is represented by a slightly different style of sheet. For the sides, Slaters 4mm sheet is being used. 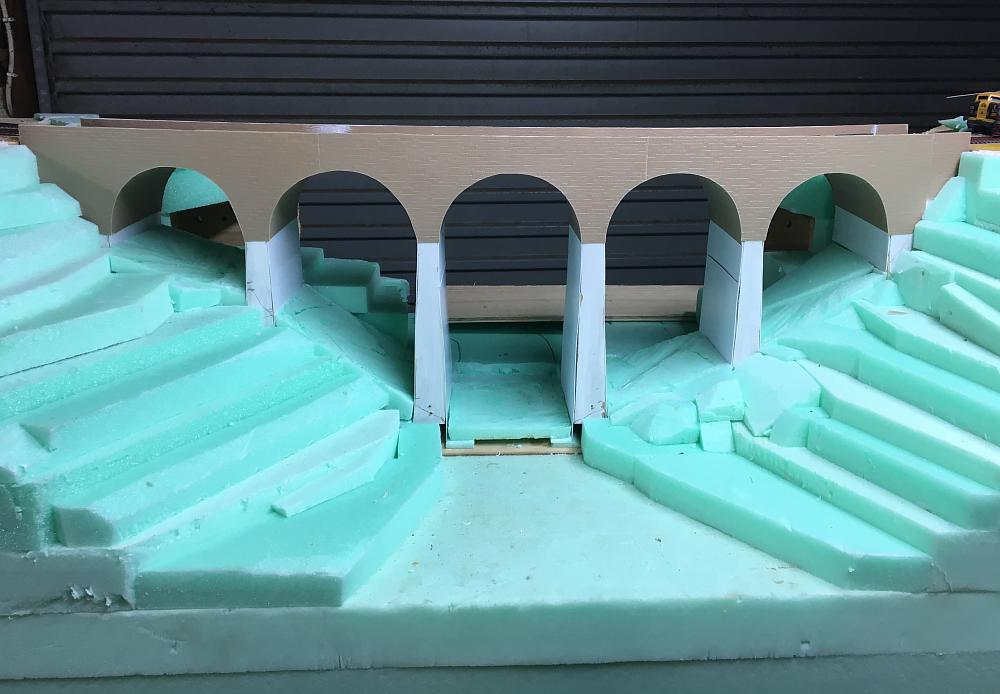 Stonequarry Viaduct with the arches lined and ready for further stone sheeting on the sides and piers.

The separate pieces that make up the Wingecarribee viaduct girders and abutments have been produced on a 3D printer. The prints are ready for pre-painting before assembly. 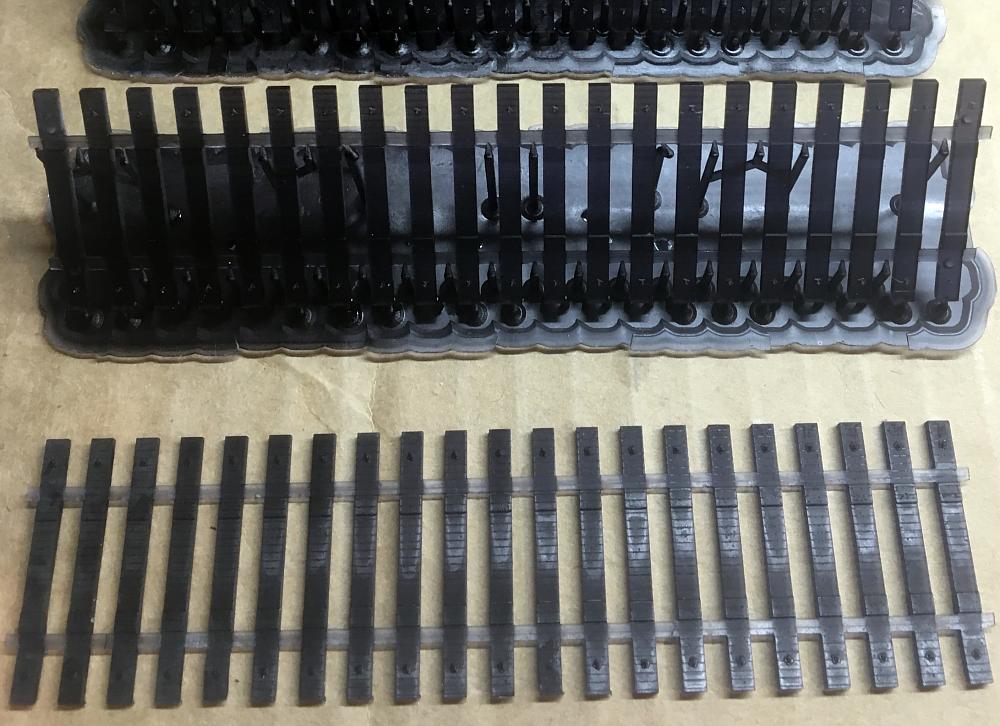 Transoms that sit atop the steel girder spans of the Wingecarribee viaduct, ready for painting. The prints feature individual nut/bolt/washer/steel plate detail that on the real bridge attach the timber transoms to the bridge sides. 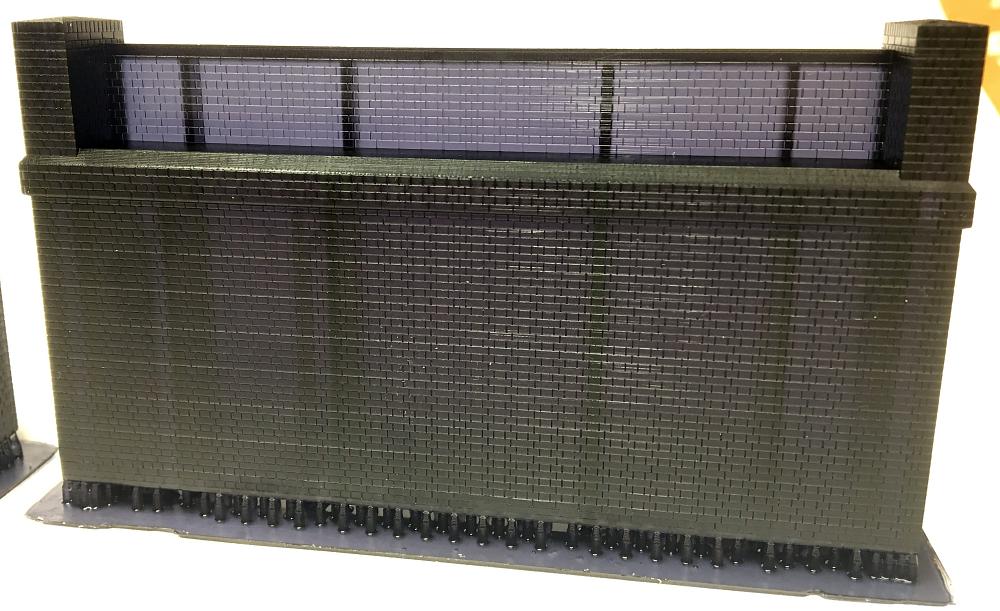 One of the abutments at the end of the viaduct, designed from plans and photos taken on location.