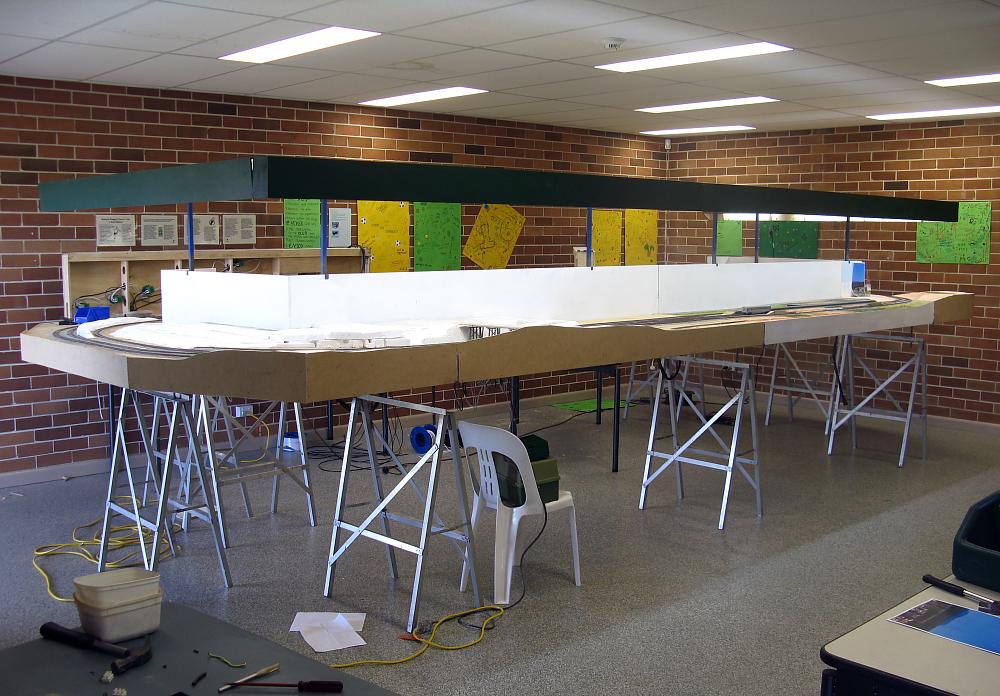 Near the beginning of the month Wallerawang was once again set up to fit the last of the backdrops to the two front modules, as well as fitting 3 millimetre (1/8 inch) MDF fascias on the front edges of all the scenicked modules. The poles which hold the lighting valences were then located and mounted, and the lighting test-fitted. Opportunity was taken to have a quick run, which provided further motivation to get scenery onto the layout.

This month has seen a flurry of activity as the Group prepares the layout for it's debut at the AMRA NSW exhibition at Liverpool, being held on the first weekend of October. Scenery work on the modules has gone full steam ahead, with the four modules receiving a coat of paper towels soaked in runny plaster applied over a shaped base of polystyrene foam. Cardboard strips were cut to shape and glued into position to form a level base for some of the roads. Kerbs and footpaths, strips of styrene pre-painted in Humbrol grey to represent concrete, were next to be installed along the road edges where required. The road surfaces were then applied, using the grey colour of the Simply Glues product 'Roadbase'.

A wide variety of scenic scatter materials were then tested in patches to choose the most appropriate colours and textures. Basic ground cover was then applied in order to obtain a uniform scenic base for the whole layout. Woodland Scenics products were mainly used: fine ground foam in burnt grass, earth and soil blends. Dirt roads were made from dried plaster pre-coloured in an earth tone. 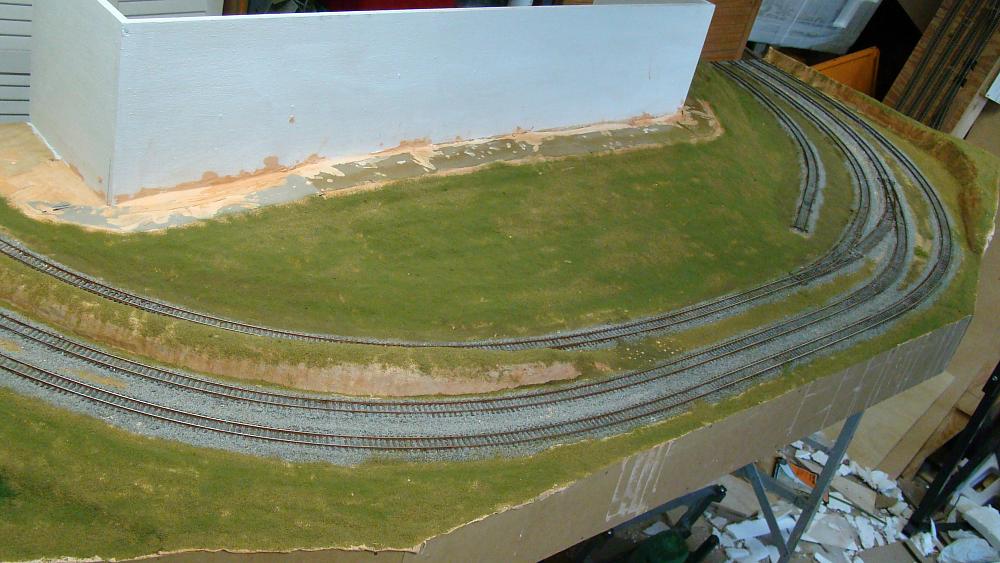 The results of a few hours work. At the beginning of the evening this module was bare plywood and polystyrene foam glued in place. The foam was shaped to form before covering the entire module with plaster. Various shades of ground cover were then applied and sprayed with 'wet water' (white glue diluted with water and a drop of detergent) to hold it in place.

Once the layout had basic scenic coverage, the backdrops were given two coats of specially mixed sky-blue paint. The station platforms also received a final airbrushed coat of Floquil grimy black paint, before having the station building, as well as the rest of the pre-built structures, glued into position. 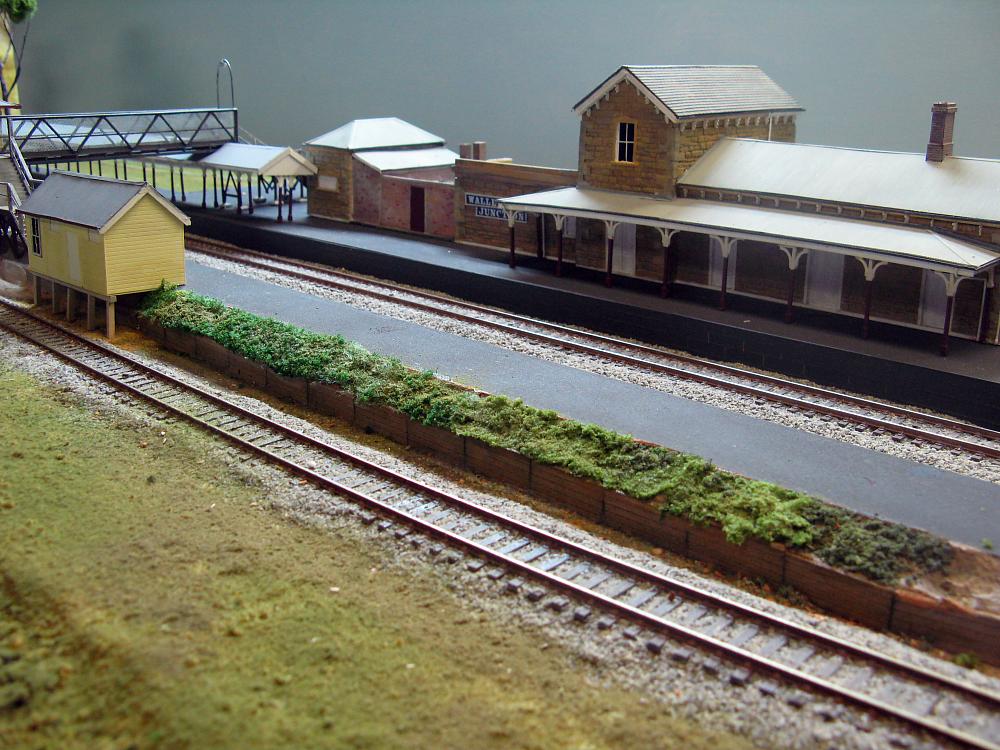 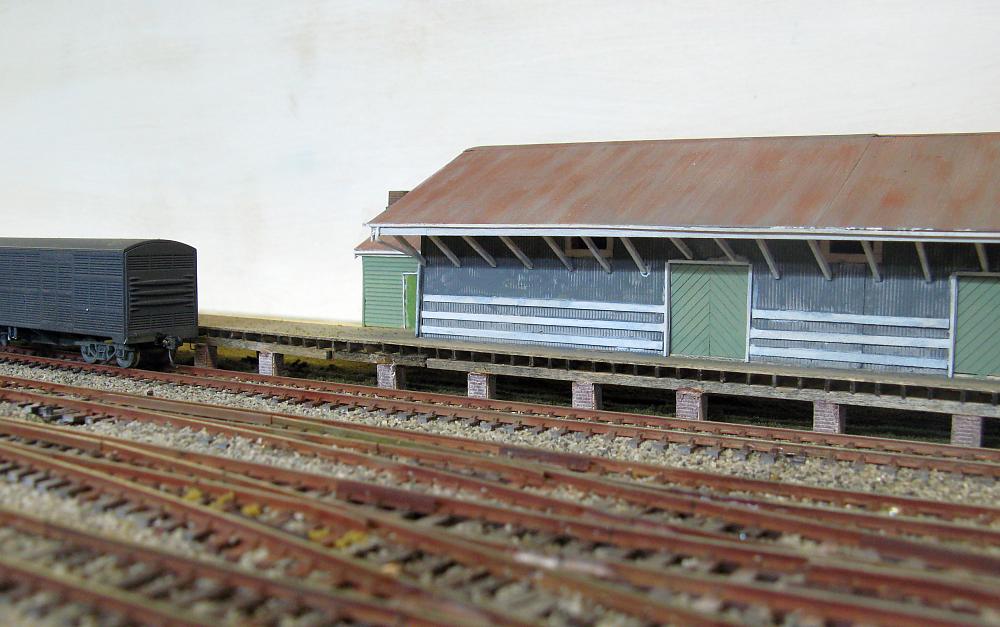 The Goods Shed and loading dock, with an empty louvre van awaiting pickup from the next local goods train.

More detailing was then applied to each module, including:

Native trees were pre-made using twisted wire coated in Selleys 'No More Gaps' (a silicone sealant), which were then painted shades of brown or grey, depending on the species being modelled. The leaves were added by teasing out and gluing on green flocking material, which was then soaked with hairspray and dipped in a container of coloured ground foam. Pine trees, Woodland Scenics packs in medium and large sizes, were also installed.

In the meantime the rest of the wiring for track power to all the roads in the storage yards was completed and tested, before moving on to hooking up the diode matrix and point motor driver boards to their respective control panels and point motors. The front fascias of all modules, and the top of the storage yard modules, were then given two coats of Brunswick Green paint. A length of material in the same green shade will be used as skirting to hide the legs and the underside of the layout.

This completes the current work on the layout, which is now ready for it's first public viewing. More work is of course required, and will be continued in the next few months, so check in again for more monthly updates.