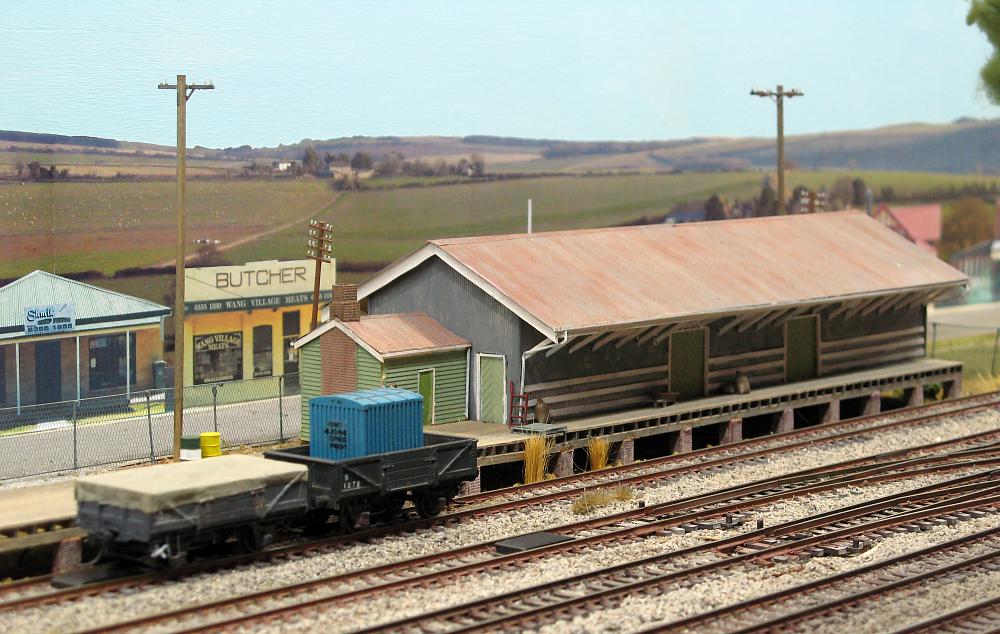 A couple of S trucks sit at the Wallerawang goods shed waiting for the next pick-up train. The goods shed was scratchbuilt from scale lumber and corrugated iron and is based on railway plans and site measurements. The S trucks are detailed Austrains models, one with a tarpaulin made from tissue paper and the other with an old LCL container that has been freshly repainted.

"Wallerawang" is an exhibition layout built by the Guildford Model Railway Group. The main aim of the layout is to represent the location of Wallerawang Junction, a station located on the Main West line between Lithgow and Bathurst, west of the Blue Mountains in New South Wales (NSW).

After deciding on the location and visiting Wallerawang in 2006, plans were drawn up and many discussions were held before the layout design and track plan was finalised. The layout consists of six modules, with four modules representing the town of Wallerawang, the station building and yard, and the branch to Mudgee. The other two modules host a storage yard for the trains.

Construction of "Wallerawang" commenced in early 2007, and the layout was exhibited by Guildford Model Railway Group between October 2009 and October 2014.

In early 2015 the layout was sold and transferred into private ownership.

Track plan of GMRG's HO scale layout 'Wallerawang'.
Click on the image to see the plan in full size.

"Wallerawang" has won the following awards: